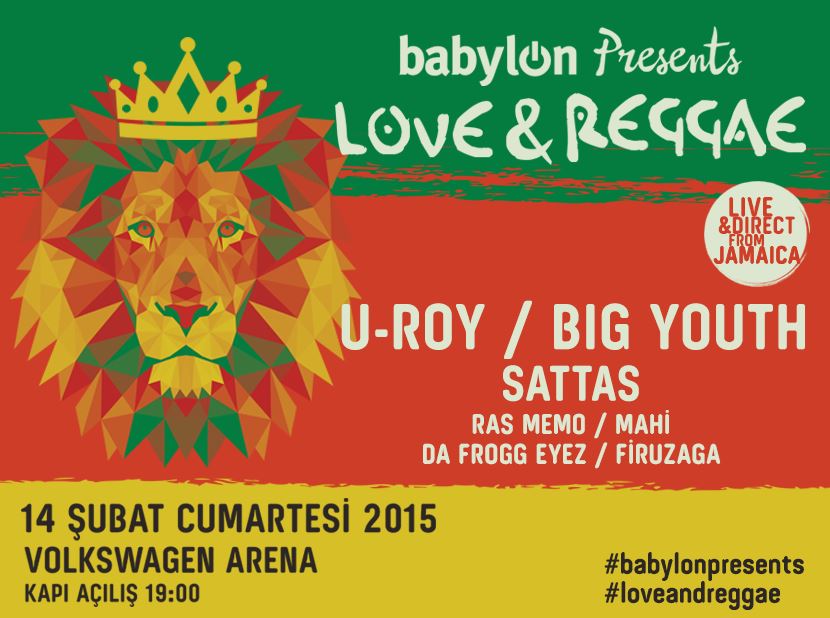 The legendary name of the musical expression of unconditional love and peace, Big Youth along with the Turkish representative of the genre, SATTAS will all take stage on February 14th, 2015 Saturday at Volkswagen Arena.


Legendary deejay of the genre, Big Youth and SATTAS, the one and only represantative of reggae from Turkey will gather at the same stage for "Babylon Presents: Love & Reggae".

“Babylon Presents: Love & Reggae” will gather all music fans under the unifying power of reggae, under the national music of Jamaica and Afro-American rhythms and most importantly under the most naive and natural way of love on February 14th, by leaving all to common boundries of love.

Jamaican musician Manley Augustus aka Big Youth’s musical career started in the early 1970’s. Inspired by U ROY and  toasting, he became a skilled  Deejay and started doing singles for producers like Jimmy Radway, Lee Perry and Phil Pratt. His first album, “Screaming Target” was released back in 1973 and is still taken as one of the most influential reggae albums of all time. Big Youth released two hit singles in 2000 with famous dub producer Twilight Circus called 'Daniel in the Lions Den' and 'What We Need Is Love' respectively.